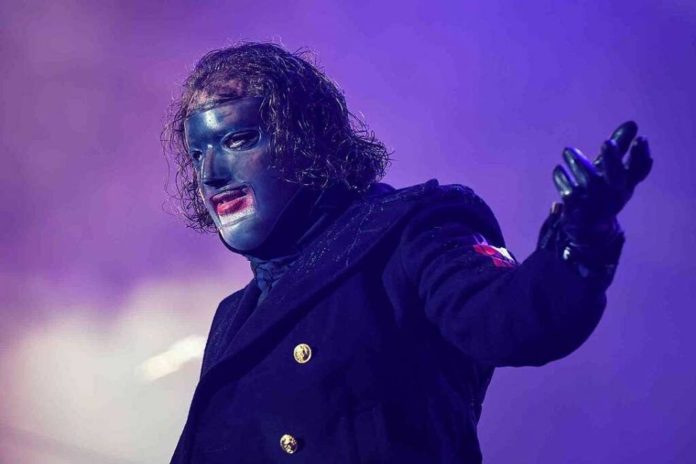 Slipknot and Stone Sour frontman Corey Taylor recently talked with Terry “Beez” Bezer of Knotfest.com‘s “Mosh Talks With Beez” about his debut solo album, of which the release is scheduled for September 2020.

Taylor recorded the album with Jason Christopher on bass, Dustin Schoenhofer on drums, and Zach Throne and Christian Martucci from Stone Sour on guitar.

“It was something I was planning to do anyway next year when I got off the road with Slipknot, and best-laid plans were just done and done because of the coronavirus pandemic,” he said.

“But I figured if this was the time to do it, why not try and do it. Me and my band quarantined. We social distanced for about two weeks, including our producer, Jay Ruston, who I worked with, and the people at the studio that I recorded at, which was Kevin Churko‘s Hideout in Las Vegas.

“This was stuff that we had been working on for a while,” he continued.

“This was stuff that I had written as the last Slipknot tour and as far back as… There’s a song on here that dates back to when I was in high school, so that tells you how long I’ve been sitting on a lot of this material. And it’s just stuff that I’ve kind of had floating around that didn’t fit with either band. It just had a different energy and a different vibe”.

“The more people asked me if I was ever gonna do a solo thing, I started going, ‘Well, I kind of know what it would sound like because I’ve got all these songs that don’t have a home anywhere else.’ And lo and behold, boom.

“We went in, we recorded 98 to 99 percent of the music live in the studio. The only thing we overdubbed was vocals and piano and some acoustic. And we did 25 songs in two and a half weeks.”

About how many songs the album will contain, he said: “Thirteen. We did thirteen originals. We recorded seven covers, and then we did six acoustic versions of the originals that we put together. Or it’s five. I can never keep that straight. Maybe it’s six covers and six acoustic versions, I can’t remember. All I know is that we did an insane amount of work in two and a half weeks — something that we thought was gonna take two months — and we destroyed it. We were doing a song a day. And we got done, and we were, like, ‘Eh, okay. What are we gonna do now?’ Everything has come together so quickly that it’s crazy.

“It’s everything I wanted it to be,” he added. “There’s some Slade in there, there’s some Johnny Cash, there’s some Alice In Chains. I mean, big choruses, fun rock, just huge solos. It’s incredible. I, actually, two years ago, started teaching myself piano just so I can record this song that I wrote for my wife, and I was able to play it and record it. And it’s really good — it’s probably one of the best things I’ve ever written.”

About the song written in high school, Corey said: “I’ve kept almost every notebook of ideas that I’ve had since I first started writing songs — since I was about 15 or 16. So I’ve got stuff dating all the way back then, just sitting in boxes. And every once in a while, the grand hoarder that I am, I’ll start going through stuff thinking that I’m gonna throw it away, and I, ‘I can’t throw that away ’cause maybe this is gonna be a song someday.’ And lo and behold, I kept finding this notebook that had the first verse — at least the first verse and the start of the second. I always remembered how it would start, and I was, like, ‘Where would we go from there?’ And it was the first song that I put together for this. I finished it finally — after 30 years, I finally finished this song. And it’s killer. There’s a riff in it that feels almost like Pantera in a way, but then there’s this overall vibe of The Charlie Daniels Band, which is cool. So it’s a mover, man, and it’s good.”

About if he has already out a song that we will hear first, Corey said: “Actually, there’s two — there are two songs that we’re gonna release first. The overall vibe of this album is fun — it is a party. You put this on when you wanna feel good. So there are two songs that we’re thinking about releasing at the same time. There’s one that is the overall crusher single — really great, huge chorus, big vibe. And then there’s another one that is just as fun on the completely other ends of the spectrum that people are gonna hear and they are going to lose their minds.

“The way I’ve been looking at it is it’s like a futuristic throwback,” he explained.

“Everything on this album is a hybrid of all these different genres that I’m really into. It’s a modern take on vibes that people have heard before, and yet I’ve taken them and kind of thrown them through this crazy filter to see what we get. Everybody who hears it is just blown away, so I’m really, really stoked.”

Ex-Slipknot drummer Joey Jordison on debut album: “One of the best memories of my life”