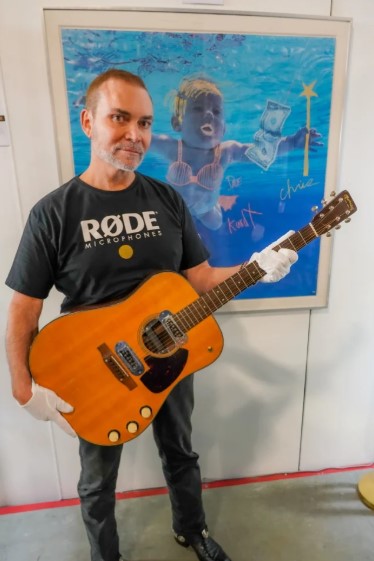 Julien’s Auctions‘ “Music Icons” ended with a record sale of one of the most famous and important guitars in the history of music: the acoustic-electric guitar played by Nirvana‘s Kurt Cobain during “MTV Unplugged” performance.

To win the auction was Peter Freedman, founder of RØDE Microphones, winning the war of offers between collectors from around the world who participated live, online, and via telephone.

Freedman plans to exhibit the guitar on a world tour of exhibitions to be held in art galleries, with all proceeds going to the performing arts.

Freedman said: “When I heard that this iconic guitar was up for auction. I immediately knew it was a once-in-a-lifetime opportunity to secure it and use it as a vehicle to spotlight the struggles that those in the performing arts are facing and have always faced.”

He continued: “The global arts industry has been shattered by the impact of COVID-19, with musicians and artists being amongst the most affected. The last few months were the straw that broke the camel’s back, and for many in the arts brought forth the harsh reality that they work in an industry for which there is little support in times of need.

“For most, access to financial and health services — particularly mental health services — is very limited. While many industries are gradually returning to normal, it’s going to take a long time before this industry can begin functioning as it was. The toll this has taken and will continue to take is enormous and requires more than just lip service. It requires action now, and I am a man of action.”