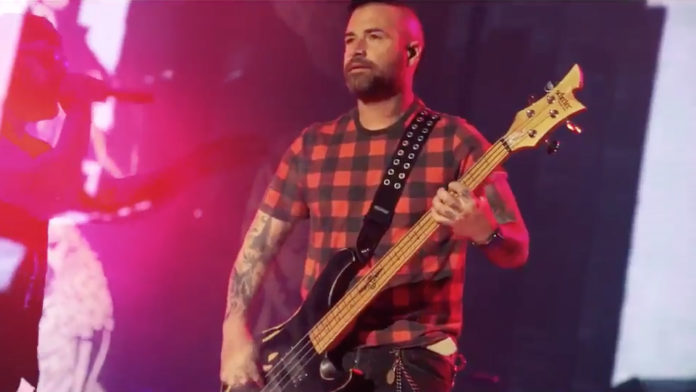 Avenged Sevenfold bassist Johnny Christ was recently interviewed by The Jasta Show on joining the band back in 2002, three years after the group was founded.

Before Johnny, A7X had three other bass players – Matt Wendt, Justin Sane, and Dameon Ash. At the time of joining, Christ was 17 years old and still in high school. Christ made his studio debut with Avenged Sevenfold on 2003’s “Waking the Fallen.”

When asked, “What would you tell a high-schooler now if he was like, ‘Hey man, I want to leave school and hit the road with a band?’,” Johnny said: “Oh man, I don’t know, I think it’s very circumstantial, to be honest. It wasn’t like I came to my parents – and my friends, and family, and loved ones who would steer me any which way or the other – with the intent of like, ‘Hey, I’m about to go join this band, I’m gonna drop out of high school – it’s gonna be fucking awesome.’

“Instead, it was, ‘Hey, my buddies down the street I know need a fill-in for bass for a two-week tour. I’m gonna make sure all my work is done, I’m gonna go do this two-week thing and get the experience.’

“And that’s how it was approached originally, and it wasn’t until like three days before the end of the tour the guys asked if I wanted to stay on. Then it became the decision to drop out. And I lucked out. The reality is – there’s a good amount of luck that goes into that shit.”

About the very first tour with Avenged Sevenfold, Johnny said: “It was a co-headlining tour with Atreyu. Who else was on that tour? There was another band, I can’t remember who else was on that tour. They weren’t on the whole tour, but maybe… Dude, this was so long ago now, I might be getting towards crisscross. I’ll just stick with the one that I know for sure – there was Atreyu, it’s a co-headlining tour with Atreyu. Two nights ended up in Showcase theater in Corona where we did two nights and flip-flopped the headlining spot. It’s actually where I met our manager Larry Jacobson for the first time.”

He added: “I broke three strings that night at Showcase theater, I was almost kicked out of the band two days after I was asked to join it, was pretty awesome. I mean, it was in the middle of sets, I couldn’t play the songs. At one point, I had to ask some of the other bands who hadn’t completely cleaned up their shit yet to borrow one of their basses. I grab it, and it is in dropped for some shit, and we’re playing Drop-D, and I’m like, ‘Oh no!’ And I’m trying to fucking tune while the song’s about to start. Of course, it was a song like ‘Sounding the Seventh Trumpet,’ that starts in a bass riff, and I’m completely out of tune, and I’m just trying to fix it as I’m going.”

He continued: “I’m sure I had issues before, but that was my first tour ever. I was almost 18 years old on the first two-week tour of my entire life. Being green as fuck, being just a rookie… I mean, you develop an ability to play on a stage where it becomes second nature. You’re not professional yet, you got to have those shows under your belt before you start to feel comfortable and start to realize those little mistakes, and you start pushing them away. In the beginning, I was making mistakes all over the place I’m sure. It’s just the nature of the beast when you’re first starting out. And then it’s all about playing it off at the beginning until you can get good enough that you’re not making those mistakes anymore.”

Avenged Sevenfold’s M.Shadows looks back on band nearly breaking up

Avenged Sevenfold’s M.Shadows: “We have pretty much 70 percent of the record done”