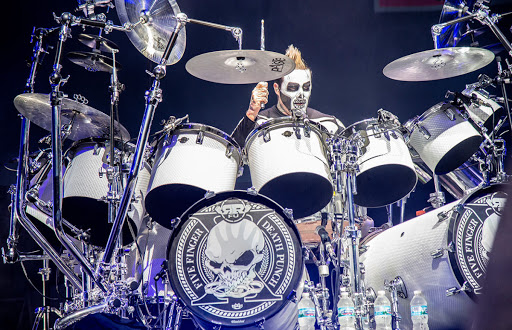 You can read some excerpts below.

About if it was “tough” for him to leave Five Finger Death Punch in December 2018: “It wasn’t tough. I physically reached a point to where I wasn’t being able to perform the way I like to perform. And I’d done it for so many years and hurt myself so much doing it. I enjoyed the time. But it was obvious that, like, athletes retire at a certain point because their bodies aren’t working. And you do anything for 14 years, it starts to grind you down mentally too. So I knew it was the perfect time for the exit, and I found the perfect replacement, I felt, in Charlie [Engen]. And I brought him to the band and helped get him as prepared as I could by giving him videos and recordings and things like that. And he stepped right in and killed it, man. He’s doing great. I think he’s working out great for them. And I’m very happy for him and them as well.”

About Five Finger Death Punch‘s commercial success: “It’s crazy, man. The thing about Death Punch is that we got in right at a time where people still bought records but then stopped. So we were one of the last bands to sell some records in metal, which was nice, because now everyone just streams shit. But they bought physical records, and we were fortunate enough to sell ’em in a day and age when nobody was buying fucking records anymore. So we were very fortunate.”

About Five Finger Death Punch‘s online haters: “Well, it’s to be expected. When bands get popular, they’re the target. And we got popular fast, and people certainly let us hear their distaste for it. And I get it; I understand. I took it with a grain of salt. I mean, when you get hated on constantly, you’re, like, ‘Woah. What the fuck?’ But then you just kind of realize what it’s all about, and you can’t get too wrapped up in that shit. Some of it’s really funny. If they’re creative and they dog you, I think that’s great. When it’s boneheaded and they dog you, that that loses my interest real fast. But when they say funny shit that’s really creative and well thought out, I always got a kick out of it. But yeah, we were definitely a target. You understand why… We came out of nowhere and got big fast, so people are, like, ‘Fuck that band!’ You know, whatever. ‘They don’t play blast beats and fucking scream and say shit that you can’t recognize and confuse people with time signatures, so they suck.’ Try writing a song that connects with people. Let’s see what you’ve got. You know what I mean? It’s not easy.”

About if he is still on good terms with his former bandmates in Five Finger Death Punch: “Well, I talk to Jason Hook every day pretty much. We’re neighbors. We’ve been friends way before the band — for, like, 25 years now. I talk to Chris Kael sometimes. I’ve talked to Zoltan Bathory a few times. Everyone’s kind of busy doing their thing. But, yeah, everything’s all good. It’s just we don’t talk every day like we used to. We saw each other every day then. But now we’re fucking 50 years old.”