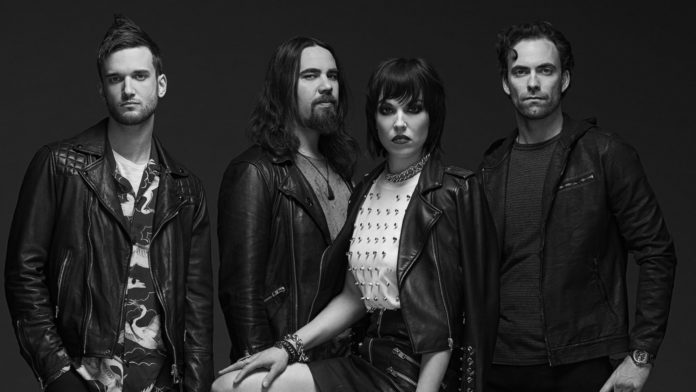 Halestorm guitarist Joe Hottinger was recently interviewed by “In The Trenches With Ryan Roxie” podcast about the new album.

He said: “Lzzy Hale and I have four or five new songs that we really like. We’ve written 20 or 30, or I don’t even know how many — just so many — but there’s four or five that we’re, like, ‘All right. We’re on to something here.’ And they’re exciting, ’cause they are different”.

Joe added: “We didn’t exactly know where we were gonna go on this next record that we’re writing — we still don’t totally know, but the haze is clearing, the fog is clearing, and it’s starting to reveal itself. And it’s rock and roll music, and it’s exciting. And it’s very us and Halestorm, but it’s a different flavor of us”.

He continued: “I don’t think we could do the same thing over and over again. We actually did that before the last record, ‘Vicious’. We had a record written, and it was good, but it was kind of rehashed everything. And we couldn’t it. We showed it to Nick, our producer, and he was, like, ‘This isn’t the record I wanna make with you guys.’ And we were, like, ‘Thank you. This is not really the record we wanna make either. I know our team is pumped about it, but we can’t do it.’ And we just scrapped it and started over. And it was totally worth it.”

The Pretty Reckless’ Taylor Momsen on Queen cover with In This Moment and Lzzy Hale: “A very natural collaboration”