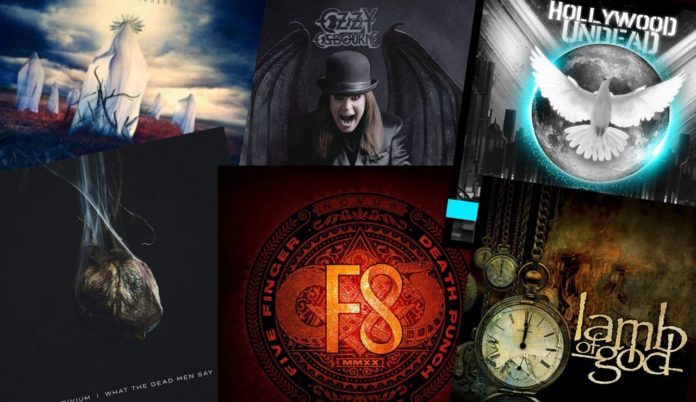 Over the past week, we have asked MetalRockNews.com readers for an opinion on which are the 2020’s best Metal & Rock albums (so far).

Well, we have the verdict and you can read the ranking below.

So far great quality albums have been released and I’m sure that by the end of the year (but especially next year) we will have a great deal of new music to listen to.

This is certainly due to the quarantine because of the COVID-19 which forced the whole world to stay home and bands took advantage to work on new music.

But let’s see the ranking of the best albums of 2020 so far.

10. Alestorm, ‘Curse of the Crystal Coconut’

Alestorm album “Curse Of The Crystal Coconut” has a sound tending to symphonic metal and metalcore. The lyrics are very funny as well as the video of “Treasure Chest Party Quest” and pirate-themed. The metal riffs of the guitar are very powerful and you couldn’t ask for anything better.

Although it was not on our list of the best albums of 2020, MetalRockNews.com readers voted to include it. However, fans who expected a return to heavier music will be disappointed. ‘Like A House On Fire’ is more pop-rock and the only song on the album that slightly recalls the style of the old Asking Alexandria is ‘The Violence’. It is certainly an album that will do its job in concerts.

This could be one of the most important albums for Green Day. The band’s sound has certainly evolved, but it’s always old Green Day style. As far as I’m concerned, the best songs on the album are “Meet Me on the Roof” and “Take the Money and Crawl”.

7. The Amity Affliction, ‘Everyone Loves You… Once You Leave Them’

Hollywood Undead continues to evolve with each album, and ‘New Empire, Vol 1’ seems to be the first part of this evolution. There are more radio songs like “Upside Down” featuring Sleeping With Sirens singer Kellin Quinn and others like “Empire” that will please the band’s longtime fans.

In This Moment album ‘Mother’ is their best and deepest album ever. One of the best songs are “Mother”, “The In-Between” and “Legacy”. Also, the collaboration with Lzzy Hale and Taylor Momsen for the cover of Queen‘s “We Will Rock You”. The album is a spiritual journey narrated by Maria Brink. A great album.

One of the longest waits for Lamb of God fans. All eyes were on the band also for the replacement of longtime member Chris Adler, replaced by Art Cruz who showed his worth behind the drum kit.

Trivium has done a great job with ‘What the Dead Men Say.’ The Trivium style has remained, but what struck me most is the phenomenal work of drummer Alex Bent.

Ozzy Osbourne for ‘Ordinary Man’ relied on Andrew Watt, producer of Post Malone, with whom he also collaborated on a song. Great artists like Duff McKagan, Chad Smith, Tom Morello, Slash, and many others collaborated on the album. Although many believe he should retire, Ozzy strikes again and has shown that he can go on for a while longer.

The new era of Five Finger Death Punch has begun. This is the first album without the drummer Jeremy Spencer (now Psychosexual frontman) and with Charlie Engen on drums and with a new record company. ‘F8’ is a mixture of sounds ranging from heavy metal with songs like ‘This Is War’ to quieter songs like ‘A Little Bit Off,’ ‘Darkness Settles In’, and ‘Brighter Side of Grey.’ Charlie Engen brought a note of freshness to the band while remaining always on the unmistakable 5FDP style.